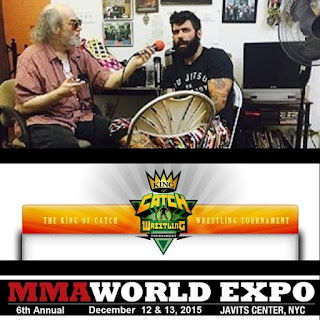 On this edition of No Holds Barred, host Eddie Goldman once again spoke with grappler and martial artist Travis Newaza.

This match will headline a catch wrestling card put on by the North American Catch Wrestling Association at the 2015 MMA World Expo.

The catch wrestling takes place on the second day of this two-day Expo, Sunday, December 13. The location is the Jacob Javits Center in New York City.

We spoke with Travis Newaza by phone Sunday.

"I love being on No Holds Barred," he said.

"And we got an awesome opportunity for a lot of the martial arts to see catch wrestling on display and to actually see a national title brought together there. And I can't wait to bring it home for California."

While he respects his opponent's ability, he said he expects to win by submission, which is "my whole goal". He promised, "I'm going to be very vicious," and said that the best-of-three-falls match may never make it to a second fall.

Besides this match, he is also scheduled to compete at the Good Fight's Tournament of Brotherly Love submission-only jiu-jitsu event in a heavyweight title match against ADCC veteran and two-time ADCC North American Trials champion Tom DeBlass. That takes place March 12, 2016, at Cairn University in Langhorne, Pennsylvania. This no-time-limit, submission-only match will have him facing, said Travis Newaza, his "toughest opponent."

We also discussed his free seminar at the MMA World Expo following his catch wrestling match, his training at CSW with Erik Paulson and Josh Barnett, why he finds it necessary to be "a well-rounded grappler," competing and training under different rulesets such as jiu-jitsu and catch wrestling, and much, much more.