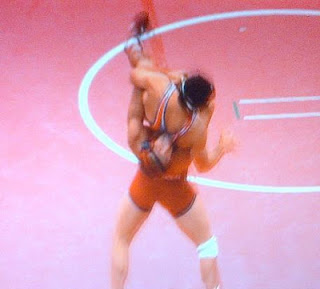 On this edition of No Holds Barred, host Eddie Goldman speaks with wrestler Kyle Dake.

Currently in his final year wrestling for Cornell, Kyle Dake has the distinction of being the only college wrestler in America to have won three NCAA Division I individual national championships in three different weight classes: 141, 149, and 157 pounds. This season he is competing at 165 pounds, and is currently ranked number one in the country.

At the Grapple at the Garden event on Sunday, December 16, at New York's Madison Square Garden, Kyle Dake won both his matches and was awarded the Bill Farrell Outstanding Wrestler Award. He also has wrestled in freestyle and Greco-Roman wrestling, having been a U.S. junior world team member in Greco while still in high school, and plans to focus on freestyle when his college wrestling career concludes this coming March. He thus is a prime candidate to achieve success in international wrestling in the years to come, and an athlete to whom the international wrestling community should pay close attention.

Right after the Grapple at the Garden event concluded, we had a chance to speak with Kyle Dake.

"I wrestled pretty tough, but there's definitely parts of my game that I can improve on, and that's what I'm looking forward to," he said in this interview. "These next two weeks are going to be really important, and we're going to come up on the Southern Scuffle and I'm going to be ready to go."

ONE Fighting Championship. ONE FC is Asia's largest and most prestigious mixed martial arts event. ONE FC features the best Asian fighters and has initiated the ONE Asia Partnership Network, which includes most of the major MMA promotions and MMA gyms in Asia. For more information, go to their web site, at ONEFC.com.