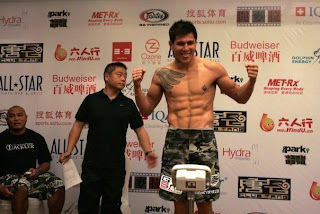 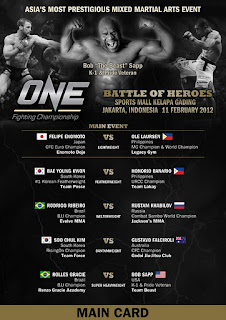 (Photo by Lee Li)
On this edition of No Holds Barred, host Eddie Goldman speaks with the former world and European muay Thai champion and now a noted mixed martial arts fighter, and the owner of the Legacy Gym in Thailand, Ole Laursen.
He will next be fighting in the main event of the ONE FC 2 "Battle of Heroes" card on Saturday, February 11, in Jakarta, Indonesia. His opponent will be the Swiss-based Japanese fighter Felipe Enomoto of the Enomoto Dojo.
We spoke with Ole Laursen by Skype Thursday as he was training for this fight while building a new gym on Boracay Island in the Philippines. He talked about his recovery from neck and knee injuries, which had forced him to pull out of a planned fight at the first ONE FC card in September against URCC champion Eduard Folayang. We discussed his return to the Philippines to train for this fight, what he knows about and how he is preparing to fight Felipe Enomoto, his transition to mixed martial arts from muay Thai, his growth as a mixed martial artist including his five-fight winning streak following losses to Genki Sudo and Caol Uno, how he has incorporated grappling into his arsenal, what led him to becoming a professional fighter, the enormous potential for growth of MMA in Asia, how ONE FC is taking MMA in Asia to a new level, why 2012 will be his year, and more.
You can play or download No Holds Barred here. You can also download No Holds Barred here. If one link does not work, please try another. The show is in MP3 format, so may take some time to download.
No Holds Barred is also available on mobile phones and iPads through Stitcher.
Also, No Holds Barred is available through iTunes.
The No Holds Barred theme song is called "The Heist", by Ian Carpenter.
No Holds Barred is free to listen to and is sponsored by:
ONE Fighting Championship. ONE FC is Asia's largest and most prestigious mixed martial arts event. ONE FC features the best Asian fighters and has initiated the ONE Asia Partnership Network, which includes most of the major MMA promotions and MMA gyms in Asia. For more information, go to their web site, at ONEFC.com.
Beezid.com - Penny Auctions. Your #1 source for exciting auction shopping and outstanding deals on just about anything! Top rated, most trusted auction site online. Where do you shop? Beezid.com - Penny Auctions.
American Top Team. Whether you're a beginner or a champion, train with the champions in Brazilian Jiu-Jitsu, boxing, wrestling, grappling, and mixed martial arts at American Top Team. Check out their web site at http://americantopteam.com/.
The American Sambo Association, which is committed to becoming the premier association in the U.S. dedicated to the advancement of Sambo. Sambo is a form of sport, self-defense, and combat established in the former Soviet Union during the early twentieth century. For more information, go to ussambo.com.