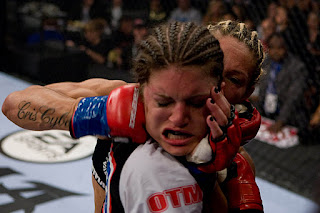 (Photo: Esther Lin, Strikeforce)
On this edition of No Holds Barred, host Eddie Goldman discusses the numerous cases of corruption and bad governance in the combat sports which have already cropped up in this brand new year.
Among the topics discussed are the statement by heavyweight boxer Dereck Chisora that boxing is "the most dodgy and corrupt sport in the world"; what we know about Mustafa Ameen, the so-called "mystery man" who was ringside at the controversial Lamont Peterson-Amir Khan fight; the positive doping test for Strikeforce fighter Cris "Cyborg" Santos, her excuses, and how this all once again illustrates the inadequate drug testing in the combat sports; the important steps taken by the International Olympic Committee and the Voluntary Anti-Doping Association in the battle against dope cheats; the late stoppage in the one-sided Strikeforce fight on Saturday, January 7, where "King" Mo Lawal scored a second-round TKO over Lorenz Larkin; new developments in the fight against corruption in FIFA; and much more.
You can play or download No Holds Barred here. You can also download No Holds Barred here. If one link does not work, please try another. The show is in MP3 format, so may take some time to download.
No Holds Barred is also available on mobile phones and iPads through Stitcher.
Also, No Holds Barred is available through iTunes.
The No Holds Barred theme song is called "The Heist", by Ian Carpenter.
No Holds Barred is free to listen to and is sponsored by:
Beezid.com - Penny Auctions. Your #1 source for exciting auction shopping and outstanding deals on just about anything! Top rated, most trusted auction site online. Where do you shop? Beezid.com - Penny Auctions.
American Top Team. Whether you're a beginner or a champion, train with the champions in Brazilian Jiu-Jitsu, boxing, wrestling, grappling, and mixed martial arts at American Top Team. Check out their web site at http://americantopteam.com/.
The American Sambo Association, which is committed to becoming the premier association in the U.S. dedicated to the advancement of Sambo. Sambo is a form of sport, self-defense, and combat established in the former Soviet Union during the early twentieth century. For more information, go to ussambo.com.