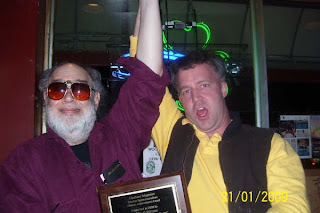 (Photo: Eddie Goldman and Ian Carpenter)
On this edition of No Holds Barred, host Eddie Goldman presents our first video show. As with any maiden voyage, there are still some kinks to work out, but we thank our colleague Ian Carpenter for being the video producer of this episode of No Holds Barred, which was recorded May 26 at the Magic Pumpkin Studios in Astoria, Queens, New York.
On the show, we begin by discussing the historic victory by Bernard Hopkins over Jean Pascal to become the top light heavyweight boxer in the world. Hopkins, at age 46, also becomes the oldest boxer ever to win a major world title. But we also discuss some other aging fighters who have not done so well of late, including boxer Roy Jones Jr. and mixed martial arts fighters Randy Couture and Dan Severn.
We next discuss the growing awareness of the severity of injuries in sports, including the incredible number of deaths in auto racing and American football, especially in high school and college football. We also note the growing number of injuries of different types for main event mixed martial arts fighters today.
And we conclude by discussing grappling and how some MMA fighters even today emphasize their submission skills. These include the unbeaten heavyweight Guram Gugenishivili, who headlines the M-1 Challenge XXVI card on July 8 in the main event against Pat Bennett.
While we do plan to do more video shows, we will also continue our audio shows as well.
You can play or download No Holds Barred here. You can also download No Holds Barred here. If one link does not work, please try another.
Also, No Holds Barred is available through iTunes.
The No Holds Barred theme song is called "The Heist", by Ian Carpenter.
No Holds Barred is free to listen to and is sponsored by:
M-1 Global. Founded in 1998, M-1 Global has staged over 100 mixed martial arts events worldwide including the M-1 Selection tournaments and M-1 Challenge events, in Eastern and Western Europe, North America, and Asia. While discovering and developing the world's next generation of superstar fighters, M-1 Global's greatest asset is the number one heavyweight in mixed martial arts history, Fedor Emelianenko. Make sure to catch their shows from around the world, including on Showtime in the U.S., and visit their web site, M-1Global.com, and the M-1 Facebook page for news, videos, and live streaming events.
Beezid.com - Penny Auctions. Your #1 source for exciting auction shopping and outstanding deals on just about anything! Top rated, most trusted auction site online. Where do you shop? Beezid.com - Penny Auctions.
American Top Team. Whether you're a beginner or a champion, train with the champions in Brazilian Jiu-Jitsu, boxing, wrestling, grappling, and mixed martial arts at American Top Team. Check out their web site at http://americantopteam.com/.
The American Sambo Association, which is committed to becoming the premier association in the U.S. dedicated to the advancement of Sambo. Sambo is a form of sport, self-defense, and combat established in the former Soviet Union during the early twentieth century. For more information, go to ussambo.com.