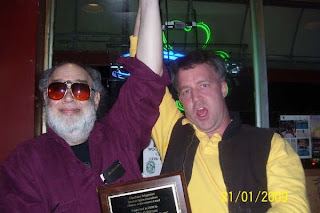 On this edition of No Holds Barred, host Eddie Goldman discusses the North American Throwdown, a joint tournament combining the American Sambo Association's 8th Annual North American Freestyle Sambo Championships and the International Submission Wrestling Alliance ISWA Catch Wrestling Open tournament. This will take place Saturday, February 25, 2012, at the Joliette Sport Center near Montreal, Quebec, Canada. Details will be announced soon, and we will be previewing this as well.

The world of catch wrestling also got another boost on Thursday, as it was announced that veteran trainer Roy Wood of The Snake Pit in Wigan in the U.K. had won the BBC North West Unsung Sport Hero award.

The disgrace of the week in boxing goes to those who approved Antonio Margarito for a license to fight Miguel Cotto at Madison Square Garden on December 3 on an HBO pay-per-view. Margarito had undergone cataract surgery, where his own damaged lens in his right eye was replaced by an artificial lens. While there was no actual rule prohibiting fighters who have had this eye surgery from fighting, in the past the Association of Boxing Commissions had felt that lens implants were not conducive to boxing. So the New York State Athletic Commission, Madison Square Garden, HBO, and his promoters Top Rank, have successfully thrown this safety precaution out the window, just so they can rake in more bloody cash. And their shills in the boxing media have applauded this.

In addition, we preview the panel discussions on legalizing MMA in New York which will be held at the MMA World Expo on December 17 and 18 in New York.