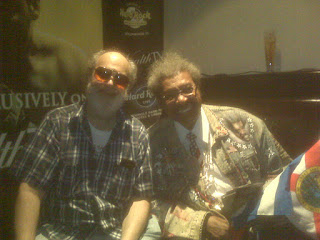 On this audio edition of No Holds Barred, host Eddie Goldman speaks with the one and only Don King.

Don King was in New York Tuesday, October 25, presiding over a news conference about the November 5 card he is promoting. Headlining that 11-fight show will be WBA cruiserweight champion Guillermo Jones (37-3-2, 29 KOs) defending his belt against Mike Marrone (20-3, 15 KOs), who is moving down from heavyweight. This card takes place at the Seminole Hard Rock Hotel and Casino in Hollywood, Florida, and will be televised in the U.S. and streamed for free online by WealthTV.

In a typically spirited, entertaining, and opinionated presentation at the news conference, Don King argued that boxing is in a "downward spiral" and in need of major change, including the way the television networks handle the sport. Besides hyping this card, he introduced Robert Herring and Charles Herring of WealthTV, which will be telecasting its first boxing card.

We spoke with Don King right after the formal news conference about this card, what changes he wants to make in boxing, how he views some other topics like the Occupy Wall Street protests, and more. We also spoke with Charles Herring to learn more about WealthTV and its plans.

In addition, we present the entire, unedited audio of this news conference. And we also explain why, despite there being two other major televised boxing cards in the U.S. that same night, this one is likely to be the best.