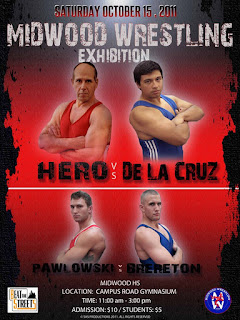 On this audio edition of No Holds Barred, host Eddie Goldman speaks with Coach George Hero, the legendary coach and founder of the Midwood High School wrestling team in Brooklyn, New York.

The 53-year-old Coach Hero will once again be wrestling this Saturday, October 15. Under NCAA rules, he will be facing NYU senior heavyweight Rudy De La Cruz in the main event of the Midwood Wrestling Exhibition 2011: Battle of the Warriors. This event takes place at the Midwood High School at Brooklyn College Campus Road Gymnasium at 2839 Bedford Avenue in Brooklyn, beginning at 11 AM. There will be a total of 12 matches held under folkstyle, freestyle, and Greco-Roman wrestling rules.

We spoke with Coach Hero Monday night by phone about this latest event, which aims to promote the sport of wrestling. We discussed his continuing participation in competition, which began at age 52 after an absence from the mat of two decades while he devoted his time to coaching wrestling. This event will also feature matches involving those he has coached and is currently coaching at Midwood, as well as many wrestlers from other schools. We discussed the ongoing efforts to promote wrestling, why this sport retains such a strong attraction to those who have ever competed in it, the need for former wrestlers to have a place to return to training and competition, and much more.