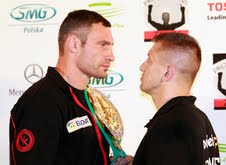 This fight takes place Saturday, September 10, at the 42,000-seat Municipal Stadium (Stadion Miejski) in Wroclaw, Poland, near Adamek's hometown. It will be televised on pay-per-view in Poland, on HBO in the U.S., and to many other countries around the world.

Along with his brother Wladimir, the 40-year-old Klitschko (42-2, 39 KO's) has been a dominant force in the heavyweight division for many years. Recently, however, Vitali has showed signs of slowing down. Adamek (44-1, 28 KO's) believes that he has the speed to counteract his much larger opponent and take his belt.

We spoke with Tomasz Adamek, his trainer Roger Bloodworth, and promoter Kathy Duva of Main Events on a media conference call last week to get their views on this important fight.