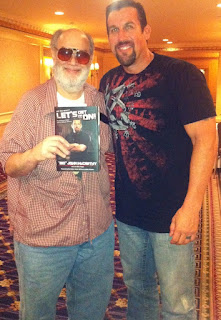 Big John is on a book-signing tour for his new autobiography, written with Loretta Hunt, called Let’s Get It On!

This book is a welcome, revealing, and entertaining addition to the library of anyone who is seriously interested in the real history and development of mixed martial arts and combat sports.

We spoke with Big John while he was in New York about his autobiography. We discussed some of what is covered in the book, including how he met Rorion Gracie and got involved with the creation of UFC, the problems today with officiating in MMA, what can be done to improve the refereeing and health and safety measures around the world, what his activities are now, and much more. He also called for an independent sanctioning body to control the belts in MMA.

"No promoter should be in charge of belts," he said during this interview. "It should be sanctioning bodies as what legally can have control of belts. Because when you have a promoter that has control of their belt, you really don't have the ability to put sometimes the best fighters together. You don't have that."