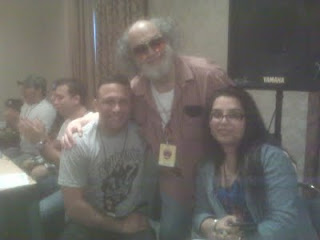 On this audio edition of No Holds Barred, host Eddie Goldman speaks with Brazilian Jiu-Jitsu, grappling, and MMA legend Renzo Gracie.
The next several weeks once again will see a hectic travel schedule for Renzo, as he is now in Singapore for the debut show of the ONE Fighting Championship. This MMA card takes place on Saturday, September 3, at the Singapore Indoor Stadium in Singapore, and will feature 16 fighters who are present or former world or national champions in various disciplines in the martial arts and combat sports, facing one another. Renzo will be cornering his cousin, Gregor Gracie, who fights Seok Mo Kim of Korea.
On Saturday, September 10, Renzo will be cornering another cousin, multi-time ADCC and Brazilian Jiu-Jitsu world champion Roger Gracie. Roger will be fighting on a Strikeforce mixed martial arts card against former Strikeforce light heavyweight champion, "King" Mo Lawal. That card takes place at the U.S. Bank Arena, in Cincinnati, Ohio, and will be televised in the U.S. on Showtime.
Next, on September 24, Renzo returns to the mat himself at the most prestigious and important grappling event in the world, the ADCC 2011 Submission Fighting World Championships. Renzo will be facing another BJJ and grappling legend, Mario Sperry, in a superfight. This year's edition of the ADCC event will take place September 24-25 in Nottingham, England, at the Capital FM Arena. Some tickets are still available.
We spoke with Renzo Monday evening at his New York academy, the day before he was set to fly to Singapore. As always, Renzo was enthusiastic about all these events coming up, and discussed them all with us.
In addition, we open with some comments on the explosive growth of mixed martial arts in Asia, and some of the lessons that these new and young promoters can learn from the history of MMA around the world.
You can play or download No Holds Barred here. You can also download No Holds Barred here. If one link does not work, please try another. The show is in MP3 format, so may take some time to download.
Also, No Holds Barred is available through iTunes.
The No Holds Barred theme song is called "The Heist", by Ian Carpenter.
No Holds Barred is free to listen to and is sponsored by:
Beezid.com - Penny Auctions. Your #1 source for exciting auction shopping and outstanding deals on just about anything! Top rated, most trusted auction site online. Where do you shop? Beezid.com - Penny Auctions.
American Top Team. Whether you're a beginner or a champion, train with the champions in Brazilian Jiu-Jitsu, boxing, wrestling, grappling, and mixed martial arts at American Top Team. Check out their web site at http://americantopteam.com/.
The American Sambo Association, which is committed to becoming the premier association in the U.S. dedicated to the advancement of Sambo. Sambo is a form of sport, self-defense, and combat established in the former Soviet Union during the early twentieth century. For more information, go to ussambo.com.