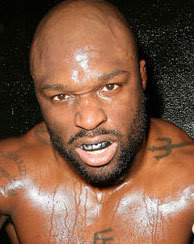 On this audio edition of No Holds Barred, host Eddie Goldman speaks with freestyle and college champion wrestler, and the former Strikeforce light heavyweight champion, "King" Mo Lawal.
After being out of action since August 2010 because of a knee injury, "King" Mo will return on September 10 to face multi-time Brazilian Jiu-Jitsu and ADCC world champion Roger Gracie on a Strikeforce MMA card in Cincinnati, Ohio.
We spoke with "King" Mo Sunday evening by phone about how he is approaching this fight. He also was in attendance at the August 13 boxing match between Joseph Agbeko and Abner Mares, and we discussed the controversy over the failure of referee Russell Mora to penalize Mares despite dozens of low blows. As always, since "King" Mo is a connoisseur of all the combat sports, we discussed what is going on in boxing, as well as international wrestling, where three-time Olympic gold medalist Buvaisar Saitiev of Russia may be making yet another Olympic run in 2012. We discussed with "King" Mo his plans for the future, how he has been training with top athletes in several combat sports, and much more.
You can play or download No Holds Barred here. You can also download No Holds Barred here. If one link does not work, please try another. The show is in MP3 format, so may take some time to download.
Also, No Holds Barred is available through iTunes.
The No Holds Barred theme song is called "The Heist", by Ian Carpenter.
No Holds Barred is free to listen to and is sponsored by:
Beezid.com - Penny Auctions. Your #1 source for exciting auction shopping and outstanding deals on just about anything! Top rated, most trusted auction site online. Where do you shop? Beezid.com - Penny Auctions.
American Top Team. Whether you're a beginner or a champion, train with the champions in Brazilian Jiu-Jitsu, boxing, wrestling, grappling, and mixed martial arts at American Top Team. Check out their web site at http://americantopteam.com/.
The American Sambo Association, which is committed to becoming the premier association in the U.S. dedicated to the advancement of Sambo. Sambo is a form of sport, self-defense, and combat established in the former Soviet Union during the early twentieth century. For more information, go to ussambo.com.