No Holds Barred: Keisha Morrisey on the Agbeko-Mares Refereeing Disgrace 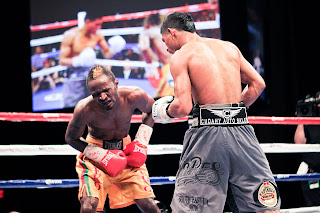 (Photo: Tom Casino/Showtime)
On this audio edition of No Holds Barred, host Eddie Goldman speaks with our colleague and correspondent Keisha Morrisey.
In the August 13 bantamweight title fight in Las Vegas, Nevada, between Joseph Agbeko and Abner Mares, referee Russell Mora let Mares land countless low blows without even deducting a point, much less disqualifying him. In the eleventh round, Mora even counted for a knockdown after Agbeko went down from a clear shot to the groin by Mares. This was one of the worst refereeing jobs in modern boxing history, and made the majority decision victory awarded to Mares virtually meaningless.
Outrage has been virtually unanimous among those who saw the fight (except, of course, from the referee), and many are calling for an immediate rematch, as well as nullifying the decision. The New Jersey commission suspended all three judges after their absurd decision in the Lara-Williams fight earlier this year, so it will be instructive to see what action if any the Nevada commission takes regarding Mora.
We spoke by phone late Saturday night right after the Agbeko-Mares fight with Keisha Morrisey. We discussed the refereeing in this fight, what it says about the continuously declining state of boxing, what should be done next, and much more.
You can play or download No Holds Barred here. You can also download No Holds Barred here. If one link does not work, please try another. The show is in MP3 format, so may take some time to download.
Also, No Holds Barred is available through iTunes.
The No Holds Barred theme song is called "The Heist", by Ian Carpenter.
No Holds Barred is free to listen to and is sponsored by:
Beezid.com - Penny Auctions. Your #1 source for exciting auction shopping and outstanding deals on just about anything! Top rated, most trusted auction site online. Where do you shop? Beezid.com - Penny Auctions.
American Top Team. Whether you're a beginner or a champion, train with the champions in Brazilian Jiu-Jitsu, boxing, wrestling, grappling, and mixed martial arts at American Top Team. Check out their web site at http://americantopteam.com/.
The American Sambo Association, which is committed to becoming the premier association in the U.S. dedicated to the advancement of Sambo. Sambo is a form of sport, self-defense, and combat established in the former Soviet Union during the early twentieth century. For more information, go to ussambo.com.