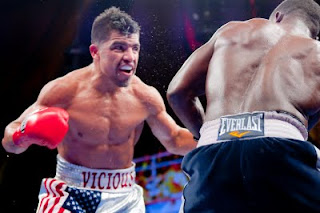 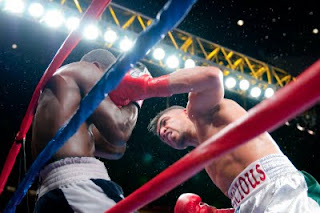 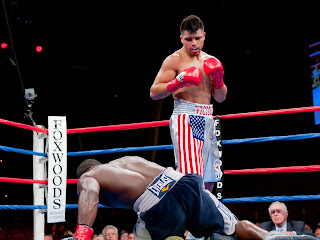 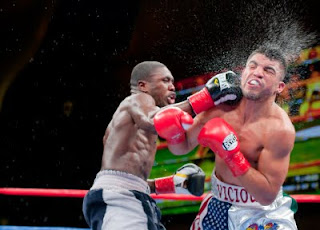 Photos of Ortiz and Berto by Cathlin Daley, Daleyphotography.net
On this edition of No Holds Barred, host Eddie Goldman previews the Joseph King Kong Agbeko-Abner Mares fight coming up April 23, reviews the recent series of upsets in boxing including the victory by Victor Ortiz over Andre Berto on April 16, and discusses the implications of the U.S. government indictment of the founders of the three major online poker sites and the shutting down of those sites.
IBF bantamweight champion Joseph King Kong Agbeko (28-2, 22 KOs) of Accra, Ghana, and the Bronx, New York, will defend his title against the unbeaten Abner Mares (21-0-1, 13 KOs) of Hawaiian Gardens, California by way of Guadalajara, Jalisco, Mexico, in the finals of the Showtime bantamweight tournament. This fight will take place Saturday, April 23, at the Nokia Theatre L.A. LIVE in downtown Los Angeles, and will be telecast in the U.S. on Showtime.
We spoke with Joseph Agbeko at a recent media workout at John's Boxing Gym in the South Bronx about what to expect in this fight. We also hear Abner Mares talk about this fight during a recent media conference call.
Not only has there been a rash of unexpected results of late in boxing, but it also is just as unexpected that so many upsets have been taking place at all in a sport where promoters and networks like to control the outcomes of fights through careful matchmaking as much as possible. The latest of these upsets in major fights took place in the main events on Saturday night, April 16, on both HBO and Showtime.
Victor Ortiz was still trying to live down accusations of being a quitter after indicating that he no longer wanted to fight in his 2009 TKO loss to Marcos Maidana, and a safety-first draw with Lamont Peterson in 2010. Now moving up to welterweight to face the then-unbeaten WBC champion Andre Berto, Ortiz vowed to prove that he had the heart of a fighter and a champion, and that his critics were wrong. Ortiz certainly re-established himself as a fighter to watch, as he won a bruising 12-round decision over Berto in the main event at the MGM Grand Theater at Foxwoods in Mashantucket, Connecticut. In that fight, yet another fight of the year candidate, both fighters were knocked down twice. We discuss that fight, as well as the upset victory by Orlando Salido against another previously-unbeaten fighter, Juan Manuel Lopez, in front of a pro-Lopez crowd in Bayamon, Puerto Rico.
On Friday, April 15, it was announced that eleven defendants, including the founders of the three largest Internet poker companies doing business in the United States - PokerStars, Full Tilt Poker, and Absolute Poker - had been indicted in the U.S. Southern District of New York on charges of bank fraud, money laundering, and illegal gambling offenses. The domain names of these online poker sites were also seized by the U.S, government. According to U.S. law, Internet gambling is illegal within the U.S. One of these three poker companies, Full Tilt Poker, has been a major sponsor of mixed martial arts fighters, especially of late in Strikeforce.
We discuss the implications of these charges, and how they highlight the need for an international sports anti-corruption agency. We also hear the question about this asked of Jacque Rogge, president of the International Olympic Committee, at a recent news conference by Jens Andersen, the International Director of the anti-corruption organization Play the Game.
You can play or download No Holds Barred here. You can also download No Holds Barred here. If one link does not work, please try another. The show is in MP3 format, so may take some time to download.
Also, No Holds Barred is available through iTunes.
The No Holds Barred theme song is called "The Heist", by Ian Carpenter.
No Holds Barred is free to listen to and is sponsored by:
M-1 Global. Founded in 1998, M-1 Global has staged over 100 mixed martial arts events worldwide including the M-1 Selection tournaments and M-1 Challenge events, in Eastern and Western Europe, North America, and Asia. While discovering and developing the world's next generation of superstar fighters, M-1 Global's greatest asset is the number one heavyweight in mixed martial arts history, Fedor Emelianenko. Make sure to catch their shows from around the world, including on Showtime in the U.S., and visit their web site, M-1Global.com, and the M-1 Facebook page for news, videos, and live streaming events.
Beezid.com - Penny Auctions. Your #1 source for exciting auction shopping and outstanding deals on just about anything! Top rated, most trusted auction site online. Where do you shop? Beezid.com - Penny Auctions.
American Top Team. Whether you're a beginner or a champion, train with the champions in Brazilian Jiu-Jitsu, boxing, wrestling, grappling, and mixed martial arts at American Top Team. Check out their web site at http://americantopteam.com/.
The American Sambo Association, which is committed to becoming the premier association in the U.S. dedicated to the advancement of Sambo. Sambo is a form of sport, self-defense, and combat established in the former Soviet Union during the early twentieth century. For more information, go to ussambo.com.