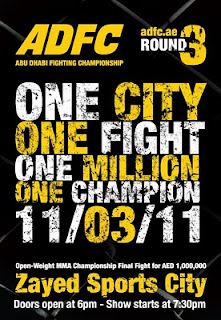 On this edition of No Holds Barred, host Eddie Goldman speaks with Randall Yogachandra, the CEO of I SEE Entertainment, which is the promoter and owner of the mixed martial arts promotion, the Abu Dhabi Fighting Championship (ADFC). We also briefly review the Strikeforce, Bellator, and HBO Boxing cards.
The ADFC will be having their third event Friday, March 11, at Zayed Sports City in Abu Dhabi in the United Arab Emirates. This will feature the finals of their open-weight tournament, with Marcos Oliveira taking on Shamil Abdurahimov.
In a lengthy discussion by Skype on Thursday, we spoke with Randall Yogachandra about this event, the concept behind the ADFC, and the importance of Abu Dhabi to the entire sporting world. They have big plans to expand throughout the Middle East and North Africa region, and work with other promotions all around the world, perhaps one day leading to the formation of an international federation for MMA.
We also open with a brief review and commentary on the main televised fights from this weekend. While Strikeforce certainly had an exciting show, the defeat of Dan Hornbuckle and Jim Wallhead in the quarterfinals of the Bellator welterweight tournament again showed that this might be the best tournament Bellator has ever held.
You can play or download No Holds Barred here. You can also download No Holds Barred here. If one link does not work, please try another. The show is in MP3 format, so may take some time to download.
Also, No Holds Barred is available through iTunes.
The No Holds Barred theme song is called "The Heist", by Ian Carpenter.
No Holds Barred is free to listen to and is sponsored by:
Beezid.com - Penny Auctions. Your #1 source for exciting auction shopping and outstanding deals on just about anything! Top rated, most trusted auction site online. Where do you shop? Beezid.com - Penny Auctions.
American Top Team. Whether you're a beginner or a champion, train with the champions in Brazilian Jiu-Jitsu, boxing, wrestling, grappling, and mixed martial arts at American Top Team. Check out their web site at http://americantopteam.com/.
The American Sambo Association, which is committed to becoming the premier association in the U.S. dedicated to the advancement of Sambo. Sambo is a form of sport, self-defense, and combat established in the former Soviet Union during the early twentieth century. For more information, go to ussambo.com.
BJJMart.com, your premier source for all Brazilian Jiu-Jitsu gear, videos, books, and much more.