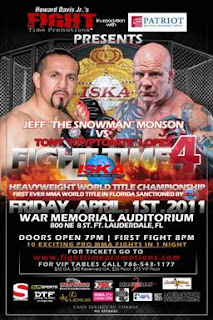 On this edition of No Holds Barred, host Eddie Goldman speaks with American Top Team mixed martial arts fighter and two-time ADCC world champion Jeff Monson.
His next fight is Friday, April 1, in the main event at Fight Time 4. His opponent will be former King of the Cage champion Tony Lopez in a fight to crown the first-ever ISKA heavyweight champion. This card will take place at the War Memorial Auditorium in Ft. Lauderdale, Florida. It will be available on Fox Sports Net and SunSports FightZone series in Florida, and will also be shown live as an Internet pay-per-view on GoFightLive.
We spoke with Jeff Monson by phone Tuesday afternoon about this fight and a number of important issues in mixed martial arts. He discussed his very active schedule of fights, even as he is now 40 years old. He is a world-class grappler, and we analyzed his continuing improvement as a striker through his training at American Top Team.
We also discussed the absence of health insurance in a sport where the aim is to hurt your opponent, a situation he called "unfathomable". And we examined the need for some type of union or association of fighters, something Jeff believes is "doable" if a proper structure is created and fighters fight in their own interests and stick together.
You can play or download No Holds Barred here. You can also download No Holds Barred here. If one link does not work, please try another. The show is in MP3 format, so may take some time to download.
Also, No Holds Barred is available through iTunes.
The No Holds Barred theme song is called "The Heist", by Ian Carpenter.
No Holds Barred is free to listen to and is sponsored by:
Beezid.com - Penny Auctions. Your #1 source for exciting auction shopping and outstanding deals on just about anything! Top rated, most trusted auction site online. Where do you shop? Beezid.com - Penny Auctions.
American Top Team. Whether you're a beginner or a champion, train with the champions in Brazilian Jiu-Jitsu, boxing, wrestling, grappling, and mixed martial arts at American Top Team. Check out their web site at http://americantopteam.com/.
The American Sambo Association, which is committed to becoming the premier association in the U.S. dedicated to the advancement of Sambo. Sambo is a form of sport, self-defense, and combat established in the former Soviet Union during the early twentieth century. For more information, go to ussambo.com.