No Holds Barred: Jen Boronico, the Voice of MMA in South Florida 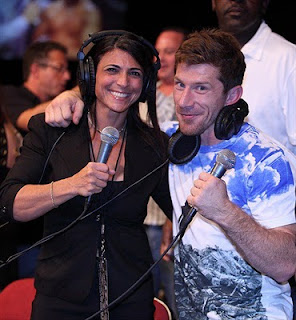 On this edition of No Holds Barred, host Eddie Goldman speaks with the voice of MMA in south Florida, Jen Boronico.
Jen is currently a color commentator for Fight Zone TV as well as for various MMA shows both in Florida and around the U.S., and has also covered boxing in the past. She has competed in several disciplines herself, winning grappling titles at NAGA events and boxing in the Golden Gloves. Besides training at American Top Team, she owns a chain of tanning clubs as well as running and performing in a rock band called Pandia.
We spoke with her Tuesday by phone about some of the recent MMA events she has covered, the media and the role of women, and women fighters in MMA. She covered the Fight Time Promotions card on Friday, February 18, in Ft. Lauderdale, Florida, where she said the fight between Caleb Archer and Aaron Cerda, won by Archer by unanimous decision, was the best fight she has seen live this year.
She also will be covering the 2011 South Florida Fight Expo, which runs Thursday, February 24, through Sunday, February 27, in Miami, Florida, and performing with her band there. Besides numerous exhibits, this event will feature competition in various forms of combat sports, including MMA, boxing, and Muay Thai.
Then on Saturday, March 5, she heads north to cover the Raging Wolf MMA event at the Seneca Niagara Hotel and Casino Event Center in the Seneca Nation in Niagara Falls, New York.
Jen Boronico is poised to become a well-known person in MMA, and you can hear just why on this edition of No Holds Barred.
You can play or download No Holds Barred here. You can also download No Holds Barred here. If one link does not work, please try another. The show is in MP3 format, so may take some time to download.
Also, No Holds Barred is available through iTunes.
The No Holds Barred theme song is called "The Heist", by Ian Carpenter.
No Holds Barred is free to listen to and is sponsored by:
Beezid.com - Penny Auctions. Your #1 source for exciting auction shopping and outstanding deals on just about anything! Top rated, most trusted auction site online. Where do you shop? Beezid.com - Penny Auctions.
American Top Team. Whether you're a beginner or a champion, train with the champions in Brazilian Jiu-Jitsu, boxing, wrestling, grappling, and mixed martial arts at American Top Team. Check out their web site at http://americantopteam.com/.
The American Sambo Association, which is committed to becoming the premier association in the U.S. dedicated to the advancement of Sambo. Sambo is a form of sport, self-defense, and combat established in the former Soviet Union during the early twentieth century. For more information, go to ussambo.com.
BJJMart.com, your premier source for all Brazilian Jiu-Jitsu gear, videos, books, and much more.