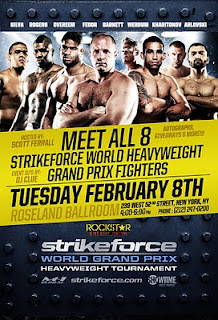 On this edition of No Holds Barred, host Eddie Goldman previews what should be the biggest week ever in the history of mixed martial arts in the New York metropolitan area.

On Tuesday, February 8, the Coalition to Legalize Mixed Martial Arts in New York (http://nymmanow.blogspot.com) will have a rally at 250 Broadway in lower Manhattan, across the street from City Hall and outside the district office of Assembly Speaker Sheldon Silver, beginning at 12 noon. The goal is to get mixed martial arts re-legalized in New York this year, and all are invited to attend.

Later that afternoon, Strikeforce will be holding a free Fan Experience event at Roseland Ballroom at 239 West 52nd St. in midtown Manhattan. All eight fighters in the historic Strikeforce World Grand Prix Heavyweight Tournament will participate in this event. Doors open at 3:30 p.m. and the event runs from 4 to 6 p.m.

This, of course, leads up to the opening round of the Strikeforce World Grand Prix Heavyweight Tournament, which takes place Saturday, February 12, at the Izod Center in East Rutherford, New Jersey, and will be televised in the U.S. on Showtime. The February 12 card is co-promoted by Strikeforce and M-1 Global. The main event features the former linear MMA heavyweight champion of the world, Fedor Emelianenko, facing Antonio "Bigfoot" Silva, in a tournament quarterfinal fight.

As we continue our extensive preview of this tournament, we spoke with fighters Brett Rogers, Andrei Arlovski, and Shane Del Rosario when they were in New York last month for a Strikeforce and Showtime photo and video shoot. On February 12, in another tournament quarterfinal fight, Arlovski will fight Sergei Kharitonov. Also on February 12, Del Rosario will fight Lavar Johnson in a tournament alternate fight. Brett Rogers will face Josh Barnett in the next set of quarterfinal fights on April 9 at a location to be announced.

Rogers, Arlovski, and Del Rosario all know that this is their opportunity to make history, and their interviews reflected the enormity of the tasks facing them.

You can also download No Holds Barred at http://www.mediafire.com/?y1r8bqjbawigo0f.

If one link does not work, please try another. The show is in MP3 format, so may take some time to download.

Also, No Holds Barred is available through iTunes at http://phobos.apple.com/WebObjects/MZStore.woa/wa/viewPodcast?id=150801513&s=143441.

The No Holds Barred theme song is called "The Heist", by Ian Carpenter (http://iancarpenter.com).

BJJMart.com (http://bjjmart.com), your premier source for all Brazilian Jiu-Jitsu gear, videos, books, and much more.