Here is what influential people in the combat sports are saying about Eddie Goldman and No Holds Barred:

"Eddie Goldman is the original mixed martial arts journalist, and an activist and historian whose ground-breaking coverage of the combat sports, combined with his political, social, and cultural criticism, has earned him the respect and love of people all around the world, and the ire of the corrupt. He is the hurdle that one must navigate if they choose to rewrite history. His intolerance for lies is legendary. He remains an outspoken proponent of justice in sports." - John Perretti, legendary martial artist and matchmaker

"He's an icon of our sport. He's the guy who puts our sport out there and pushes us to a different level in terms of information and news. So don't miss what he has to say." - Brazilian Jiu-Jitsu and MMA legend Renzo Gracie

"A great job online. You do the best job. All your writing is beautiful. It's where the old newspapers were." – Joey Reynolds, radio legend

"Eddie Goldman is the man who started to broadcast on the Internet, the man who was one of the reporters to start to believe in the sport. I'm proud to have 10-15 years to talk to you, and you're still in the business. Don't matter the new guys coming, but the old guys are still in the place." – Brazilian Jiu-Jitsu and MMA legend Wallid Ismail

"The best place on the air to find out all your combat sports news." -- Stephen Koepfer, the president of American Sambo Association and head coach at New York Combat Sambo

"You could talk to the next ten fight gamers you meet and not get the same kind of unapologetic depth that you get when you get an Eddie Goldman." – Eugene Robinson, in acclaimed book Fight

"If you want to know about boxing, MMA, and all combat sports, this is the place to be, and it's the only place to be." – Charles Farrell, award-winning boxing writer and musician

"Eddie Goldman, a classic New Yorker whose knowledge of all combat sports is without parallel." – L. Jon Wertheim, in Blood in the Cage

"The Dean of Fight Sports Radio." – The Boxing Truth Radio

"The godfather of MMA media." – Crooklyn, of TapouT Radio

"The Internet king." – Don King, the king of boxing promoters

"One of the most respected journalists in MMA." – MMAPayout.com

"The Smithsonian of combat sports." – "The Fight Nerd" Matthew Kaplowitz

On this edition of No Holds Barred, host Eddie Goldman speaks with Stephen Koepfer, the president of the American Sambo Association and the head coach at New York Combat Sambo.

In an interview conducted at the New York Combat Sambo school in midtown Manhattan on Thursday, we discussed the history and development of the different types of sambo, including sport sambo and combat sambo. Since sambo was originally developed in the former Soviet Union during the early twentieth century, Russia and Eastern Europe remain the current strongholds of sambo. We discussed what techniques and types of submissions are allowed in both sport and combat sambo, why sambo is very useful for mixed martial arts, the history of the major international organizations which have governed sambo, and more.

We also discussed the newly-formed Coalition to Legalize Mixed Martial Arts in New York. This is a non-partisan volunteer group of organizations, gyms, business owners, and individuals who support the legalization and regulation of mixed martial arts in the state of New York.

The Coalition to Legalize Mixed Martial Arts in New York will be holding a rally on Tuesday, February 8, 2011, at 12 noon, in support of legalized and regulated mixed martial arts in New York State, at 250 Broadway, Manhattan, New York, 10007 (across the street from City Hall). We discussed this rally and why all those in the combat sports should support it. 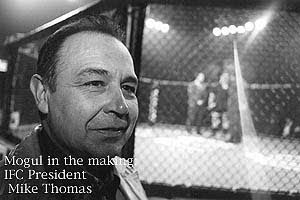 On this edition of No Holds Barred, host Eddie Goldman speaks with Mike Thomas, the founder of First Nations Tae Kwon Do Mixed Martial Arts in the Mohawk Territory of Kahnawake, Quebec, Canada, and the former president of the International Fighting Championships (IFC).

Mike Thomas is a pioneer in mixed martial arts. He played the lead role in getting the province of Quebec to sanction the sport and adopt a set of rules to govern it in 1998. The Quebec rules were later basically adopted by California and New Jersey in 2000, which opened the door for the adoption of the unified rules of mixed martial arts in 2001, which were also based on all those rules.

Mike Thomas was also the on-site promoter for Battlecade Extreme Fighting 2, held April 26, 1996, in Kahnawake. The day after that event, eight participants were arrested in Montreal for supposedly participating in an "illegal prizefight," charges which were later thrown out.

It was our privilege and pleasure to speak by phone with Mike Thomas on Monday afternoon. We reviewed his own path which led him to the world of martial arts, which included some detours, and how martial arts allowed him to overcome many problems in life. We discussed at length the events leading up to the Battlecade Extreme Fighting 2 event, the relations between the Mohawk community and the governments of Quebec and Canada, the arrests after Battlecade Extreme Fighting 2, the vindication of those charged, and the eventual agreements which led to the adoption of the Quebec rules and the legalization and sanctioning of the sport in Quebec.

We discussed the importance of the combat sports to the culture and spirit of the people in Kahnawake, and why these sports remain so important today. We explained the pioneering role in mixed martial arts played by organizations including IFC and Extreme Fighting, and key individuals including John Perretti, Larry Hazzard, Paul Smith, and others. We thus clarified much of the early history and nature of mixed martial arts, about which so much misinformation and confusion has been spread.