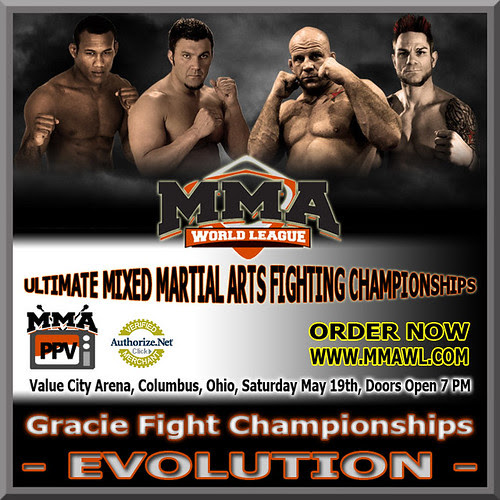 On this edition of NO HOLDS BARRED, host Eddie Goldman speaks with mixed martial arts and jiu-jitsu legend Wallid Ismail.

Wallid is the driving force behind the newly-formed Mixed Martial Arts World League (MMAWL). This organization has recently begun offering webcasts of many MMA fight events from around the world put on by various promoters. Using the latest technology from the Internet TV provider wavelit.com, these shows are being offered both as pay-per-views and for free.

The next live pay-per-view webcast will be the Gracie Fighting Championships MMA event, which will be held this coming Saturday, May 19, at the Value City Arena in Columbus, Ohio. Among those headlining that card will be ADCC and Brazilian Jiu-Jitsu world champion Ronaldo "Jacare" Souza and 2007 ADCC champion Damian Maia.

We spoke with the always-outspoken and colorful Wallid about all these topics and how he sees the MMAWL developing.

IFL, the International Fight League, the world's first professional mixed martial arts league. Make sure to check out their regular TV shows on FSN (Fox Sports Net) in the U.S. and to check your local listings for dates and times. You can also catch the IFL's newest show, "IFL Battleground", every Monday on MyNetworkTV from 8-10 PM. An encore presentation will run each Saturday night from 8-10 PM. Check out the IFL web site, ifl.tv, for a listing of IFL live events and their TV schedule.

On this week's edition of SecondsOut Radio, host Eddie Goldman speaks with unbeaten middleweight "Ireland's" John Duddy (19-0, 15 KOs). The popular and exciting Duddy will fight Dupre Strickland (18-1-1, 7 KOs) Friday night, May 18, at the Beacon Theater on the Upper West Side of Manhattan in New York.

We spoke with him about this fight, why he has amassed such a large following, his upcoming plans, and where he thinks he stands in his quest to win a major world title.

Also on this show, we comment on the untimely passing of Diego Corrales this past week; this coming Saturday's doubleheader featuring middleweight champion Jermain Taylor against 154-pound champion Cory Spinks and the expected middleweight shootout between Kelly Pavlik and Edison Miranda; the controversy surrounding this past Friday's lightweight bout between Jose Miguel Cotto and Prawet Singwangcha; and more about the "boxing is dead" crowd.