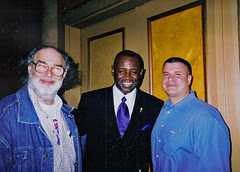 
On this week's edition of NO HOLDS BARRED, host Eddie Goldman speaks with Nick Lembo, Counsel to the New Jersey State Athletic Control Board.

This past Sunday, December 10, the CBS show "60 Minutes" ran a segment entitled "Mixed Martial Arts: A New Kind Of Fight". Like almost all such reports in the mainstream media, this piece was filled with historical and factual errors about the origins and development of mixed martial arts (MMA), especially about its rules. We discuss these errors, how UFC and MMA really developed, and the crucial role played by the New Jersey State Athletic Control Board in helping save MMA by sanctioning it in 2000, before the present owners of UFC purchased that organization. We also discuss the key role of Larry Hazzard Sr., Commissioner of the New Jersey State Athletic Control Board, as well as a number of related issues involving MMA, boxing, and the media, and especially the important role played by the MMA media. In doing so, we present a balanced picture of MMA's past and provide a framework for understanding how it should continue in the present and future to develop as a legitimate sport.

IFL, the International Fight League, the world's first professional mixed martial arts league. Make sure to check out their regular TV shows on FSN (Fox Sports Net) in the U.S., and Rogers Sportsnet in Canada, and to check your local listings for dates and times. Check out the IFL web site, ifl.tv, for a listing of IFL live events, including the first IFL World Team Championship final, set for Friday, Dec. 29, at the Mohegan Sun Arena in Uncasville, Conn.

BJJMart.com, your premier source for all Brazilian Jiu-Jitsu gear, videos, books, and much more
# posted by Eddie Goldman : 5:17 AM