Veteran martial artist Nathaniel Teodoro has a nice blog covering all aspects of the martial arts and self-defense. It is called Teodoro Defensive Arts, so check it out, read through it, and link to it.

Their debut show is Sat., June 3, 2006, at the Oakland Coliseum Arena in Oakland, CA. Their web site has all the info about this event, including how to order tickets.

And tonight I plan to tape both the De La Hoya-Mayorga pay-per-view and the Garcia-Rivera show on Showtime, and eventually watch them both completely. Having two cable boxes and VCR’s sure comes in handy when the networks run major shows at the same time to cut each other’s throats and thus screw the public.

Help Protect Vision Coverage
Urge Your Senator to Vote NO on S. 1955

The U.S. Senate is poised to pass legislation that would undermine important patient protections at the state level. S. 1955, the Health Insurance Marketplace Modernization and Affordability Act, would allow small business to bypass state insurance requirements, and would leave their employees without access to critical vision care.

Many state laws require insurance companies to cover vision services such as eye exams, eye glasses, vision screenings, glaucoma and diabetic retinopathy treatments, as well as other important services. If S. 1955 becomes law, however, these important protections will be lost.

Please urge your Senator to vote against this legislation. Click here to send a letter: http://capwiz.com/preventblindness/issues/alert/?alertid=8740236

“Cousins from Different Cultures” on TheSweetScience.com

Do fans of “Star Trek” also watch “Stargate”? Do those who crave McDonald’s hamburgers also like hot dogs? Do Elvis aficionados listen to Johnny Cash, or Charlie Parker lovers to John Coltrane?

One would think that there is a substantial crossover within these groups. But in the combat sports, it ain’t necessarily so.

In my column this week on TheSweetScience.com, I examine some of the aspects of the rocky relationship, or even absence of any relationship, between the worlds of boxing and mixed martial arts. Interviewed is a man who knows both of these worlds very well, Larry Hazzard Sr., commissioner of the New Jersey Athletic Control Board, which regulates both of these sports in that state. We talked about this last Saturday in Atlantic City, at the debut show of a new mixed martial arts league, the International Fight League (IFL).

The piece is called “Cousins from Different Cultures”.

Check it out and leave some comments.

Which Boxing Show Will You Watch Saturday Night? 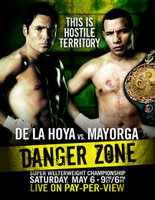 It must be a good indicator for the future of pro sumo wrestling in America that a blog has just recently been set up to follow the new World Sumo League (WSL).

This new blog, which very visibly notes that it is both unofficial and unauthorized, comes out of Chicago, where the WSL's tour visits on May 27.

Check it out and pay close attention to the emergence of this new league for this very old combat sport.

On this week's edition of SecondsOut Radio, host Eddie Goldman previews the huge boxing weekend coming up in the U.S.

This past Saturday night, April 29, at the Trump Taj Mahal in Atlantic City, NJ, the International Fight League (IFL) held the debut show featuring its mixed martial arts league. We have already posted the IFL’s post-fight press release on the Combat Sports News on KingoftheCage.com.

On this week’s edition of NO HOLDS BARRED, we have in-depth analysis of that show with several of its major participants.

We speak with Brazilian Jiu-Jitsu and mixed martial arts legend Renzo Gracie, coach of the Pitbulls, which narrowly lost its IFL meet to the Tiger Sharks, three matches to two.

We speak with former UFC champion Jens Pulver, who won his super fight with Cole Escovedo by knockout in just 56 seconds of the first round.

We speak with former world kickboxing, UFC, and Extreme Fighting champion Maurice Smith, coach of the victorious Tiger Sharks. His team now advances to the first IFL team championships June 3, also at the Trump Taj Mahal in Atlantic City, against the Silverbacks, coached by another former UFC champion, Pat Miletich.

We discuss the issues of fighter safety and how boxing and mixed martial arts stack up against each other with two of the very few people who know both sports intimately. We speak with Larry Hazzard Sr., commissioner of the New Jersey State Athletic Control Board, which regulates combative sports in that state. We also speak with veteran cut man Leon Tabbs, who has worked for years in both the UFC and the corner of former undisputed middleweight champion Bernard Hopkins.

Plus, we offer our own commentary and analysis of the IFL’s debut show, explaining what they did right and where they need to make improvements.

Also, NO HOLDS BARRED is now available through iTunes.

Underhook, with Next Level Apparel, the tops in grappling shorts, rashguards, and more.

We are preparing our next edition of NO HOLDS BARRED with interviews from this past Saturday’s IFL debut show, and waiting for the next edition of SecondsOut Radio, with previews and fighter interviews about this coming weekend’s busy boxing schedule, to be posted. Plus, I am working on several articles, both for online and print media.

In the meantime, here’s a rockin’ way to keep yourself both entertained and informed: Tonight, Tuesday, May 2, will see the telecast of the season finale of Nashville Star. The three talented finalists, Nicole Jamrose, Casey Rivers, and Chris Young, will all be performing. Big & Rich will both be performing and returning as guest judges. Cowboy Troy, the show’s co-host, will also be performing live, singing his latest song “My Last YeeHaw”, and rising star Jason Aldean will sing live as well. As is the norm in the finale of these “reality” shows, we are told to expect some surprises.

This season finale will be a live 90-minute show beginning at 10 PM EDT/9 CDT on the USA Network. It will be repeated at 1:30 AM EDT, so check your local listings. Check it out, y’all, and see and hear some of country music’s newest talent.